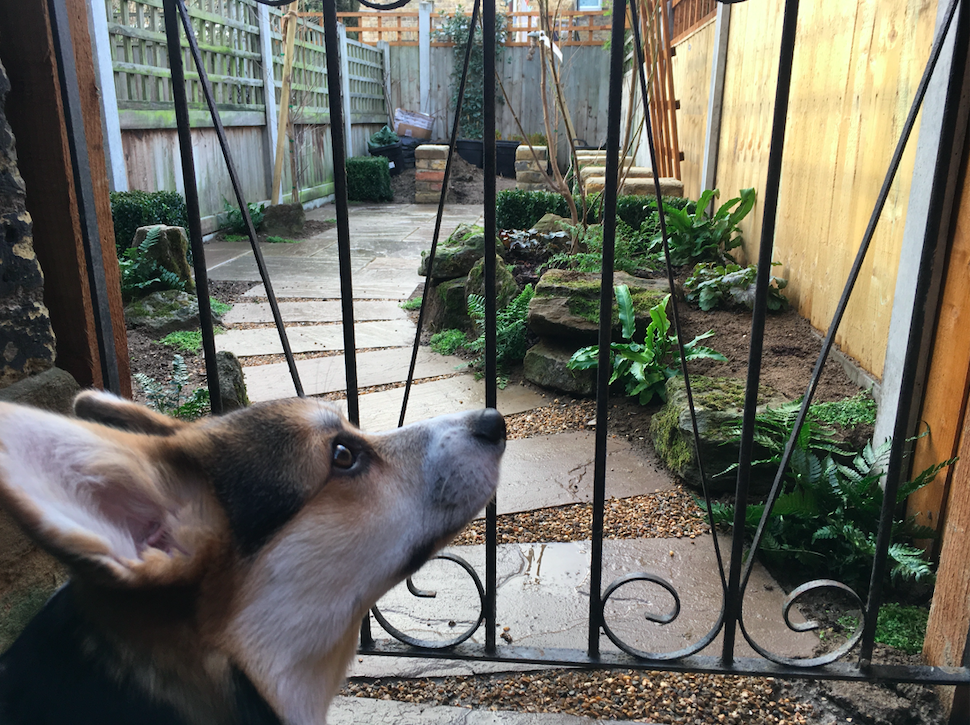 I have a few things I need to get off my chest, so this post is as much confessional as it is a gardening blog.

Topics include poop (of course), disappointing my father, and my petty but deeply satisfying campaign of vengeance against Blue Van Man.

Grab yourself a cup of tea.

Confession One: Poop is like a box of chocolates

As long-time readers of this blog will know, there’s way too much poop in my life. But now it’s not just the local cats. The local foxes have joined in the fun, turning my garden into East London’s premier vulpine sluice pit.

I mean, there’s a lot of poop. It’s f**king relentless.

Compared to cat poo, fox poop has volume. They’re sloppy, mustard-coloured stacks of skinless sausage, like something out of Heston Blumenthal’s molecular gastronomy phase but without the price tag or presentation.

And while I find it disgusting, not every member of my family feels the same way.

Pablo is, for now, normally kept out of the back garden. We have a lovely iron gate for expressly that purpose. The other day as I was going through the gate, Pablo slipped past me, shooting out into the garden to enjoy its delights.

And when I say “delights”, I mean fox shit. He belted up the garden towards the nearest pile of poop in a line so efficiently straight that Eighteenth Century cartographers would have marvelled at it and elected him their leader.

In a fit of coprophilic bliss he sniffed it, licked at it — savouring the prospect of the feast like a true connoisseur — and tucked right in. I wailed at him to “leave it!” but I may as well have been singing the Major General’s Song from the Pirates of Penzance wearing only rubber boots and a string of onions for all the good it did.

I pushed him away and scooped up the remains into a poop bag. Undeterred in his mission, he dashed over to the next turd a few yards away. And so it was I found myself desperately chasing him around the garden, clawing helplessly at poop bags that wouldn’t open, pointlessly screaming “leave it, leave it” as he bounded from shit to shit, licking away like a five-year-old who’s broken into a box of Ferrero Rocher.

I’m not sure he’s ever had so much fun. I’m not sure I’ve ever been so appalled, disappointed and angry (and I voted for Kevin Rudd).

I’ll move onto a different topic in a second, I promise, but I have one more poop-based complaint and it’s relevant to the narrative, so bear with me.

WHY CAN’T DOG OWNERS PICK UP THEIR PET’S POOP IN THE STREET?

If I’m not contending with cat and fox poo in the backyard, then it’s dog dung on the footpath. The streets around here are overflowing with the stuff. For crying out loud, this is London, not Paris.

Confession two: I must have rocks in my head

I have actually been doing some gardening. Quite a lot of it.

Last time we caught up, the paving had just gone down. Now, the planting has started.

Here’s the patch of garden I’ve been working on.

This bit of garden is meant to feel like a shady path, leading into a woodland. Which is no mean feat when it’s less than two metres wide and needs to contain the shed and, probably, a water butt.

I didn’t want the ground to all be at one height and introducing levels would make it seem more naturalistic while providing little nooks and crannies for plants. Using timber or any machine cut material to make the raised bed would have ruined the effect I wanted.

The obvious answer was rocks.

Bloody rocks everywhere. A surfeit of rocks. So much so, that Dad would give them away to people to use in their gardens or for retaining walls. Whole trailer-loads of them. For free. You want them, come and get them! They’re yours.

Naturally, we used them in our own garden and when I was creating my first raised beds, every one of them was bounded by rocks.

Now, East London is not replete with rocks. Actually, they are quite hard to come by. The only ones you ever see appear to be spoken for, in the sense that they’re in someone else’s garden — and I’m not in the habit of purloining other people’s rocks.

My father will be outraged to learn this, but… I… I paid for rocks. And I used the Christmas money he gave me to pay for them.

And they weren’t cheap.

Let’s take a look at the garden progress

On the bright side, they’re beautifully mossy bits of granite that fit perfectly with the garden’s aesthetic.

That tree is a beautiful (and small) magnolia (Magnolia liliiflora ‘Nigra’). It flowers in a lovely pinky plum, sort of the colour of a yeast infection.

It is under-planted with three kinds of fern: asplenium, dryopteris and polystichum. There are a couple of heucheras, too. The under-planting so far has focused on hardy evergreens to provide year-round colour.

You can also see the trimmed box that I’m using to provide structure to the garden.

Some perennials will be planted in between the planting you can see, to provide summer colour and interest, but I wanted to make sure the garden looked inviting all year round.

Frankly, I’m thrilled with the result. I don’t think I could be happier with it if Ryan Reynolds was stood bare-chested in the middle of it, dibber in hand, volunteering to scatter my bulbs.

Finally, I’ve had a lot of people get in touch asking about the neighbourhood’s answer to a honey badger, Blue Van Man. (If you don’t know who I’m talking about, boy are you in for a treat. Read more here.)

Well, he’s still around and he’s still vociferously keeping the Queen’s peace, one unsolicited shouting match after another.

A few weeks ago he was driving behind me on one of the local roads. We were coming up to an intersection and the light had just gone green. Instead of continuing apace, the car in front us of slowed down. A peek in the review mirror confirmed Blue Van Man had also noticed this and was immediately becoming annoyed.

The car pulled almost to a stop, indicated, and — just before the intersection — crossed slowly into oncoming traffic and drove up onto the footpath on the wrong side of the road.

I can’t know for sure what happened next because I pulled away to catch the light while it was green but in the rear-view mirror I saw him stop and wind down his window.

You might remember Blue Van Man accused me of not respecting the neighbourhood (indeed, of not integrating) because I had left some rubbish on the verge for the council to come and collect. In my last post I wrote something chippy about the state of his hedge — which I go past every day when I’m walking Pablo.

Well, I don’t know if he’s been reading this blog, but look at his hedge now!

What I hadn’t quite appreciated was how well the scruffy hedge had been hiding his bins but, upon seeing them, I suddenly had an idea. You remember the tonnes and tonnes of dog poop I mentioned gets left behind on our footpaths by irresponsible dog owners? Well, I’ve started to collect it.

And guess where it goes?

I know, I know. I’m a petty bitch. But hey, Blue Van Man cares about the state of our neighbourhood. Surely this is what he’d want?